Click here  to visit our new site, featuring a wide variety of digitized items relevant to the history of Macksville and the surrounding area.

See below to learn about the history of the Macksville City Library.

The following was taken from the Macksville, Kansas Community History 1886-1986 Centennial book:

The Macksville Community Library was organized in January of 1935, sponsored by clubs and organizations of the community.  Its first home was in the annex of the grade school, which later became the lunch room.

A silver tea was held on February 9, 1935 for the official opening of the library.  Finances for the library were obtained from donations, silver teas, plays, picture shows, tag days and other fund raising projects for the purchase of books and operating expenses.

In April of 1937 aid for the library was received from a City levy.  In order to receive the aid from the levy, the library was placed under the jurisdiction of City officials, who appointed a library board.  The name was then changed to the Macksville City Library.  Generous donations to the library were adequate to cover expenses, and the tax levy was dropped.  In 1958 the City aid again became necessary, and a one mill tax was levied.  In 1984 this levy was increased to two mills.

The library was housed in the school until January of 1950, when it was moved to the City Building.  In 1958 Mrs. Irma Smith purchased the U.B. Church and School building, built in 1927, which was located in the Valley Center community.  This she donated to the City for their new library and arranged for it to be moved to a lot deeded to the City by Mrs. A.G. English for the location of a City library.

Months of arduous labor by the librarian, Mrs. Carrie Biggs, clubs and individuals preceded the opening of the new library in July of 1958.  During the following months many improvements in the interior were made, such as the installation of a furnace, rest room, fixtures and furniture with the help of the community and interested citizens, improvements have continued through the years.  In 1962 a cement walk was laid, and a new tile floor in 1963.  The Cloverleaf 4-H Club donated an electric wall clock that year.  In 1966 (two) new lights were installed, and about ten years later the flourescent lights currently in use were installed.  In 1970 the roof was shingled, and in 1972 the Contemporary EHU donated a book depository.  New steps were built in 1979, and in 1982 the Lions Club painted the outside of the building.  A year later new blinds were installed at the windows through the effort and generosity of everyone in the community who donated money and food, which was sold at bake sales.  Mrs. Irma Smith donated a typewriter in 1984 and another fine gift for our 50th birthday.  The librarians, library board members and patrons of the library have been and are deeply grateful for the support and generosity of these and the numerous other unnamed groups and individuals who have helped to make our library a pleasant place to browse and select books for many hours of enjoyable reading.

Along with the physical improvements in the library building have been improvements in the ability of the staff to serve the patrons more effectively.  In 1966 the non-fiction books were cataloged by the Dewey Decimal System into categories, and a card file was set up so the patrons and staff can quickly determine if the library owns a certain book and where it would be located.  In 1974 our library joined the South Central Kansas Library System headquartered in Hutchinson.  This allows us to have the rotation of over 300 additional books every two months from the book truck.  Any book in any library in the nation is available to our patrons through interlibrary loan, although if a search is made out of Kansas, a fee is charged the patron.  Our library has recently been the beneficiary of a grant from the System, which will allow us to purchase a new set of World Book Encyclopedias and a new unabridged dictionary.  These will be on our shelves in early summer.

The total number of book in our library at the end of 1984 was 9,404.  220 of these were purchased that year and/or donated by clubs and individuals.  Several of these were given as a memorial to friend and loved ones.  We have made no attempt to count the many paperback books donated to us by individuals and other libraries.  In 1984 we loaned 2997 adult and young adult books, 1088 juvenile books, 99 magazines, and we loaned one book to another library.  136 books were borrowed on interlibrary loan from other libraries, and 9 requests for photocopies were filled.

The Open House held at the library on April 17, 1985 honored both the library’s 50th anniversary and National Library Week.  Cake and cookies, coffe and punch were served to 41 well-wishers.  We want to thank everyone for taking the time during a very busy day to celebrate with us.

“The books you read,

Though you may not possess them on a shelf,

For they become the treasures of yourself.” 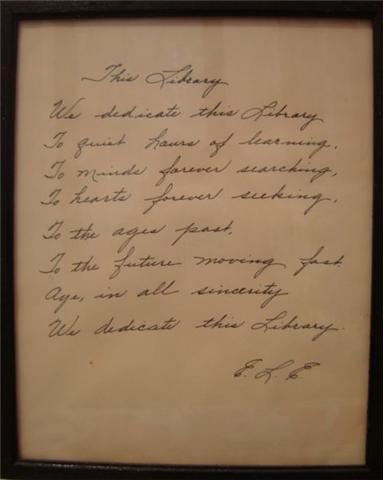